The Galapagos archipelago sits astride the equator 1000 kilometers from the Ecuadorean mainland. It is comprised of 19 principle islands ranging in size between 1 and 4588 square kilometres, and over 100 smaller islets and rocks. The landscape varies from stark lava flows and bold craters adorned with candelabra cacti and fragrant palo santo (incense tree) woods to lush cloud forests in the highlands of the larger islands. The climate is typically arid with two general seasons. During the hot season air temperatures rise into the 90s and long interludes of clear sunny days are interrupted by periodic rain showers. The cool season arrives when cold currents wash through the archipelago. Air temperatures generally stay in the 70s, and the days are frequently cloudy with periods of misty drizzle or “garua”. The waters of Galapagos are closely tied to the ebb and flow of the Humboldt and Cromwell currents and thus sensitive to fluctuations in the world climate, especially El Niño phenomena. Unpredictable and striking changes in temperature and rainfall occur as a result, creating dramatic variations in animal populations. Life on land may flourish while sea bird and sea lion numbers diminish as a result of excessively warm sea temperatures, or land birds may suffer under drought conditions while unusually cool sea temperatures grant a proliferation of food for the seabirds.

The Galapagos are famous for their fauna and flora, their uniqueness having captivated naturalists ever since the buccaneer William Dampier visited the archipelago in 1684 and Charles Darwin explored the islands in 1835. To the modern naturalist the islands are especially important for their endemic wildlife, with three quarters of the land bird species (including 14 species of Darwin’s finches and 4 species of mockingbirds), and most of the terrestrial reptiles (giant tortoises, land and marine iguanas, lava lizard, snakes and geckos) found nowhere else in the world. Due to its isolation, the Galapagos are also home to an abundance of nesting seabirds. The world’s largest concentration of red-footed boobies nest here. Blue-footed boobies ostentatiously flaunt their cerulean feet in high-stepping, sky-pointing courtship dance, while frigatebirds show-off scarlet balloon-sized gular pouches. The air is filled with a mesmeric symphony of whistles, sighs, honks and ululations. Waved albatross bill fence in a comic pas de deux, the flightless cormorant perform a graceful snake-like courtship dance, and red-billed tropic birds launch themselves into the sky in “screaming parties”, their long white tails streaming behind them. It is also the only place where penguins (the Galapagos penguin) are found in the northern hemisphere.

Since much of the terrestrial life depends on the marine world for sustenance, it is not surprising that underwater Galapagos is another rich and fascinating environment. Replete with myriad reef and pelagic fish, sea lions and fur seals, algae-feeding marine iguanas, green sea turtles, dolphins and whales, the seas surrounding the Galapagos islands abound with life.

If you would like to learn more about the Galapagos Islands check out our Recommended Reading list and join Greg on one of his trips. 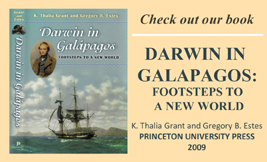